I am constantly seeking fact upon fact on why I am in love with my city, my home. Not because I feel insecure about where I live, but because I am a believer. As I hear the news that Chicago is one of the top four (4!) cities in the running for the 2016 Olympics, I smile. I think back to the pleasant shock I felt while discovering that in the year 1893, beating out New York City and Washington DC, Chicago trumped the location for the largest, most awe-inspiring World's Fair. I refer to the 1893 World's Columbian Exposition, aka, the Chicago World's Fair of 1893.

This fascinating event spanned 600 acres (2.4km), took in nearly 27 million people (the automobile was not even invented yet!) and featured the birth of the Ferris Wheel, named after George Washington Gale Ferris. Ferris was brought in to design a useful (money-making) machine that was as post-card friendly as the Eiffel Tower. The 1889 Paris World's Fair was the one to beat, and in grand scale, Chicago surpassed all expectations. As the "White City", named after it's temporary bright white stucco buildings and a magically new technology of electric street lights, it inspired many. Poet Katherine Lee Bates was so taken by the illumination of the fair grounds that she penned "Thine alabaster cities gleam..." This passage, and the entire poem was put to music as the United States 2nd (unofficial) anthem, "America the Beautiful."

All these buildings and sculptures were temporary and built specifically for the fair. They are not part of the modern day City of Chicago. One of the dark sides of the fair focuses on the more seedy, unofficial exhibits in the "Midway Plaisance." This long street of "pleasure" showcased a walking tour of foreign beauties and attractions that would make any man swoon or sweat. Belly dancing, native music, snake charmers and camel rides were exotic fairie tales that no American would have ever seen if not for the fair. Buffalo Bill was outcast from the proper exhibit halls to the Midway Plaisance because of his low-brow performances, only to make a killing in ticket sales and keep the profit all to himself. 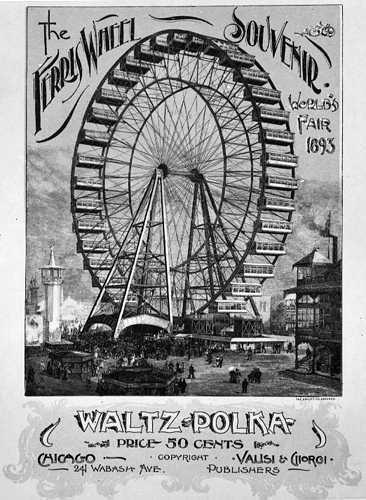 In the deep darkness the fair's 6 month run, America's first serial killer H.H. Holmes found his playground, torturing victims in his labyrinth hotel (you can get in, but you can't get out) and used his medical training to perform heinous crimes with the unwilling. So many countries had exhibits to show off their art, architecture, food, and innovations. If you are from another country, do you know what your nation exhibited? i encourage you to find out as there are amazing things to uncover. Wikipedia it. You'll be glad you did. Uncover and share! -------------
Chicagoans: - The original site of the fair is located on the southside lakeshore (Jackson Park). Most buildings were temporary, so the only 2 remaining buildings are the Art Institute of Chicago and the Museum of Science and Industry. - The street of attractions "Midway Plaisance" is still named as such and is located in the University of Chicago area. - The nickname "Monsters of the Midway" of the Chicago Bears is taken from this fair street, as is all other references to Chicago as "Midway". It is synonymous with fun and games. ;)
Browse the Archive »